A better way to read and write In a world overwhelmed by paper, Sony presents a revolutionary way of working. The Sony Digital Paper, a device that gives you the ability to annotate, share and save your documents, all from a practical, digital-paper device that is light enough to carry anytime and anywhere. 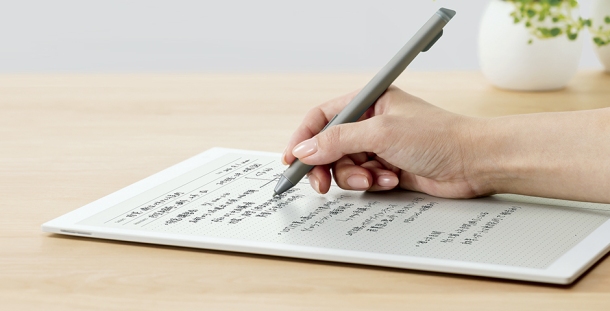 The Japanese electronics company recently launched its new DPT-CP1 tablet “Digital Paper”, an E Ink tablet designed for people who still want to pretend to write on real paper while taking advantage of the convenience offered by a digital device. Tablet.

Back in 2014, Sony launched a new tablet designed to allow professionals to read and write documents without using real-world paper. The Digital Paper tablet had an eye-catching E Ink display and a long-life battery, but it was expensive. The e-reader/tablet was updated last year to improve screen resolution, reduce storage space and add unlocking of the NFC device. Now Sony Japan has announced a smaller portable version called DPT-CP1.

The original Digital Paper was in no way a simple pocket beast, measuring roughly the proportions of A4 paper. It’s successor, the RP1, went a few millimeters from here and there, and a few grams. The CP1 is again smaller, this time filling the A5 dimensions and only 5mm thick.  As before, the tablet has a superior E Ink screen, which measures 10.3 inches diagonally with a resolution of 1,404 x 1,872 points and offers 16 levels of grayscale adjustment.

This display technology means less eye strain than using, for example, an iPad and allowing it to be used in direct sunlight without having to worry about reflections or reflections.

In addition to reading PDF documents (its only compatible file format), CP1 users can also write notes and notes courtesy of the active stylus provided. It has a core-memory that is emerging as a 64-bit quad-core Marvell processor and has 16 GB of internal memory. Sony recognizes that around 11 GB is available for archiving documents, which translates into approximately 10,000 documents.

It has an integrated Bluetooth 4.2 and 802.11ac Wi-Fi that was currently exploited thanks to the development of a new complementary application for sharing documents between the CP1 and a smartphone, with NFC making the wireless connection as easy as moving the mouse over the other. Battery life is up to 3 weeks for recharging, depending on how it is used, while the lithium-ion battery of the stylus should be valid for one month of regular use.

The electronic ink technology used in Sony’s CP1 is the same screen technology found in Amazon’s Kindle e-book readers. Therefore, the product also reproduces the experience of reading the physical card on a digital screen. Interestingly, Sony has also made sure that the tablet does not just read.

According to Quartz, the new tablet also offers the ability to reproduce the feeling of writing on paper with a pen or pencil. This explains why the CP1 is marketed as the perfect replacement for laptops.

Because it uses electronic ink technology, the new Sony tablet does not consume a lot of battery. In fact, it boasts of having a three-week battery. Sony has also created a complementary application for iOS and Android operating systems that consumers can use to move documents, read, annotate or access CP1.

So, what better way could you possibly write in this modern age? Well, take this product from Sony with you every day, and experience writing with a modish touch.