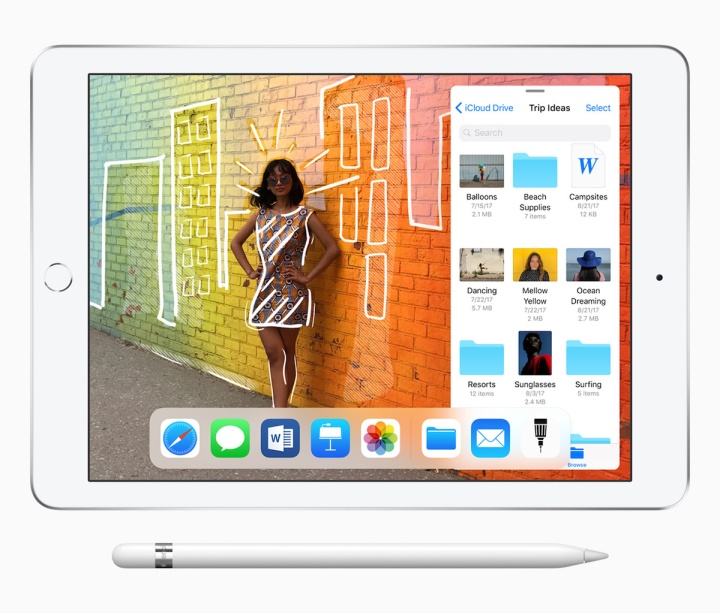 “Macs and iPads are used in all schools by students for everything from music to language arts and even advanced robotics,” said Apple CEO Tim Cook during the event.

Well, if you’re still asking yourself whether to buy one or not, we’ll be showing you the important factors of how this new Apple iPad works. So, here are some of the information that you may want to know about the New iPad, including its specs, release date, pricing and third-party extensions.

Apple has announced the new 9.7-inch iPad with support for Apple Pencil. The new iPad will take advantage of Apple’s Pencil stylus, which costs an additional $99.

In addition to a 9.7-inch Retina display, the new iPad includes an A10 Fusion chip, HD front camera, Touch ID, It has an 8-megapixel camera and 10 hours of battery life. It weighs only 1 pound (469 grams), Apple said. The A10 Fusion chip means the iPad is more powerful than most laptops and, in essence, all Chromebooks.

The new iPad also has LTE options: with the Apple SIM, customers can connect to their wireless data plans. It uses 300 Mbps LTE connectivity.

“The new 9.7-inch iPad takes everything people love about our most popular iPad and makes it even better,” said by Greg Joswiak, an Apple marketing executive.

The iPad’s Retina display will also open up augmented reality possibilities for students, such as the virtual fracture of a frog. It is powered by the device’s Retina display, a powerful chip, improved cameras and advanced sensors with a gyroscope and an accelerometer. The tablet is designed for mobility and student durability, with a one-piece aluminum frame.

The iPad mimics the features already available in iPad Pro, such as tilt and pressure, as well as a high-resolution touch system that enables quick responses. Apple Pencil will also have its own set of applications available, the most popular being Pages and Keynote.

The pen will allow users to add smart annotations to pages, which means that students and teachers can add markings to the page document directly.

Apple also increased iCloud storage for schools from 5 gigabytes to 200 GB and presented a program for school administrators, as well as making the Classroom application available for the Mac.

Apple called the 9.7-inch tablet “our cheapest iPad”. In terms of the pricing, the device starts at $300 for schools and $330 for consumers. The new iPad is available for orders starting this week (April 2018). The cheapest current iPad also costs $329.

The new iPad is Apple’s answer to Chromebooks with Google technology, which would eventually become the reference gadgets for teachers in the classroom. Apple devices were used to fill schools across the country, but have since declined as Chromebooks have grown in popularity.

If you find that the $99 Apple pen is too expensive, Logitech offers a $49 alternative to children, called Crayon.

In collaboration with Logitech, Apple has announced a third-party stylus for the iPad called Crayon. It is a cheaper alternative to Apple Pencil, priced at $50. In addition, there will also be a Logitech Rugged Combo $ 100 keyboard case with a stylus slot.

With support for Apple Pencil, the new features come in Apple’s office suite: iWork. With Pages, users can use a clever annotation that lets you add notes to the page. Students will also be able to add drawings on both pages and Keynote in their reports, along with the ability to write numbers to create lab reports.

The Apple software platform is known as Classkit also includes Schoolwork, where teachers can easily assign an activity within an application and monitor student progress. The application will also allow teachers to send PDF files, including links to websites and while writing notes. But all student data will be private so that only teachers can access information. With Apple Teacher, teachers will be able to work with educators to access and share their information through the Learning Center.

Competition between Google’s Chromebook and the Apple iPad

One of the main advantages of Google compared to educators for Apple was the cost of Chromebooks compared to the iPad. While schools often purchase Chromebooks for around $250 to $300 each, iPads for schools can cost nearly $800, partly because of the school curriculum included in the Apple tablet. Apple offers a $29 discount for schools with their newer iPad, but it’s even more expensive than most Chromebooks.

In the last quarter of 2017, there were six out of ten mobile devices that were sent to a K-12 school in the US. They were Chromebooks, according to Google. Although not a direct comparison, 11% of schools are using an iPad with an iOS, according to FutureSource Consulting.

All improvements in Apple’s software and hardware could help students and teachers to adopt the iPad more widely. Total sales of the iPads have decreased for three consecutive years, and the prices and complexity of managing iPads have been key factors in the rise of Chromebooks in schools. A hardware price cut of $30 may not be enough to convince schools, but if Apple continues to offer its software features, then it may have a unique way of fighting the Google Chromebook domain.