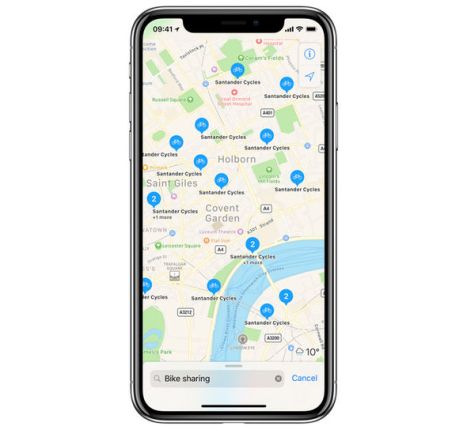 The company has partnered with Ito World (a data company specializing in global transport challenges) to integrate data into Apple Maps. Apple Maps has had a bad reputation since its launch in 2012 when it replaced Google Maps as a default map application on iOS devices.

From the lack of functions to different errors and the supply of obviously wrong addresses, it was not exactly the application of the maps of Apple users and many users asked for the return of Google Maps. But improvements, including the search function of shared bicycles, have led some users to come back.

Searching for shared bike stations in Google Maps works, but only up to a certain point. It does not always show all existing stations and only shows a handful of stations simultaneously, instead of a complete and complete visual representation of all stations.

The feature was also available to a limited extent in Apple Maps, but the new version is a significant update. The partnership allows Apple to simply integrate the current Ito World dataset of bicycle sharing systems instead of having to individually populate each city’s information.

In general, the new bike-sharing network within Apple Maps facilitates traveler access to over 12,810 points of interest.

In the United Kingdom, Apple Maps will guide you to the places of Bath, Belfast, Glasgow, London, Milton Keynes, Stirling and the University of Warwick.

Moreover, this solution by Apple is largely becoming an essential way for people around the world who indulge themselves in using bike-sharing applications daily.

This is because the growing popularity of shared bicycle services, both new and familiar, as a means of getting around the city is very important for bikers, tourists, and civilians.

However, given the limited number of cities currently available for this update, it will be far from being a universal solution. It is likely that Apple will continue to work with Ito World to add more locations over time.

Also, as TechCrunch reports, the new feature does not actually tell you if there are bikes available. This would require close integration with shared bicycle services.

There are several applications that provide more complete data on stations and availability (usually from the same providers), but it is always useful to have the information within an existing Map application. Google Maps already includes data to share bicycles, so it helps Apple go online.

Apple and Ito World have recently signed an association, so from now on, Apple Maps will have data on the nearest bike sharing stations. All you have to do is simply type “shared bike” in the search bar of Apple Maps, or simply the name of the service, and it will show you the locations on the map. This feature is currently active and includes data from over 179 cities with a total of 176 services.

Ito World has enough experience in working with dozens of companies that have tried to grant licenses and standardize data on shared bicycles. Thanks to the partnership, Apple will not have to assemble these data internally and can simply integrate all data into a single data model.

Apple Maps has improved significantly in recent years after a disastrous launch in iOS 6. In most cases, the company can now compete with Google Maps.

However, Apple Maps currently only displays contact information and service address, while other more sophisticated applications offer the number of bicycles available, as well as empty basins. These features are expected to be provided with future updates, or there is not much advantage in switching to Apple Maps because there are no available docks for other bike-sharing applications such as Mobike, Ofo, and oBike on the market.

Currently, an essential use of the Apple Maps is if you’re traveling to a different city and you want to use a shared bicycle service. The different cities will have different services to share bikes with different names. Therefore, you will need to take Google to find such services in your area, but with the current update of Apple Maps, you can do the same thing.

You can not deny the fact that People rely on Google to find answers to most problems, including location-based queries. The association of Apple and Ito World is simply an effort of the Apple company to remain relevant with Google’s updated ‘Maps’ application.

In fact, the application now has additional features that allow you to search in airports and shopping centers, as well as guidelines, public transit, EV charging stations and much more. This makes Apple Maps a solid application to be used in your area.